In October 1997. 6-year old Courtney H. started to have neurological symptoms, including headaches, trouble hearing, stumbling, and double vision. On 11 November 1997, Courtney was diagnosed with a tumor on her brain stem. According to a first-person narrative authored by her parents in February 1999, the prognosis was about 3 months. (This is of course, highly variable.) Courtney underwent 6 weeks of radiation therapy, some 33 treatments. The parents were clearly shocked by the weight gain caused by the steroids that her doctors put her on, likely to reduce swelling around the tumor.

After the radiation treatment, Courtney went to North Carolina to be put on a chemotherapy regimen at Duke. She had two more months of this treatment. Courtney, then, had two therapeutic regimens before she went to the Burzynski Clinic. This is important to consider when we see what came later. Both chemotherapy and radiation can kill cancer for months after they have been administered.

In April 1998, Courtney’s family took her to the Burzynski Clinic. According to the father:

With no time to waste, we packed up and drove to Texas. After 1 month on antineoplastons, the tumor had decreased by 30%. That was the best news I have ever had in my entire life. I felt as if a bulldozer had been lifted off my back.

The reasons that there are controlled trials is to determine whether or not it was the chemotherapy Courtney had just finished, the radiation that she had, the antineoplastons, or some combination of these that contributed to the reported decrease. It’s hard to tell what improvement, if any, she has experienced with respect to this reported decrease, as the father says:

However, Courtney was still suffering. The steroids had put her in a wheelchair because her feet were so swollen she couldn’t walk without crying.

Apparently, she is still on steroids at this point. (Steroids seem to be part of the routine at the Burzynski Clinic; she was on steroids before Burzynski as well.) Three months after the family started treatment, in the summer of 1998. the family was trying to taper her off of the steroids:

Courtney has done wonderfully on antineoplaston therapy. After 3 months of treatment, her tumor decreased by about 50%. When she was being tapered off the steroids, however, Courtney developed pneumonia, became dehydrated, and went into a coma. We were air­lifted by helicopter to Children’s Hospital. She was unresponsive for 3 days. She had a catheter inserted to collect urine, and IV in her arm, a tube in her nose to her stomach to remove excretions, and a tube down her throat so she could breathe. A spinal tap was performed. The doctors initially told me Courtney was bleeding in her brain. Later, we were relieved to find they were wrong. What they believed to be bleeding turned out to be calcium deposits. After she came out of the coma, she stayed in the hospital for another week. Then she came home, and we put her back on antineoplastons.

The calcium deposits in the brain can appear following inflammation of brain tissue. The doctor’s suspicions of stroke, however, might not be unfounded. Children have had strokes while on antineoplastons; take the cases of Elizabeth K. and Haley S. (and the Clinic’s heartless response to Haley’s stroke), for instance.

In a brief Cincinnati Post article from 30 July 1999 we hear how much this treatment is costing Courtney’s family:

The controversial treatment, which was created by Dr. S.R. Burzynski, features the use of a substance called antineoplastons. The family struggles financially because their medical insurance won’t cover the $14,000 per month cost of the treatment, which is considered experimental.

Yes. Going to Burzynski bankrupts families, who turn to their community who often bankrolls the dubious patent medicine. Take for instance the junior-high student who raised over $3,600 for Burzynski, as reported in the Post on 4 March 1999. Or the $42,000 raised at a single fundraiser for Courtney, according to an article from June 24, 1999. Communities rally behind the sick. However, would they be so generous if they knew what it was funding?

Even in the laudatory report written by Courtney’s parents, it’s hard to see anything that looks like progress, as he reports that after she returned to treatment:

Unfortunately, that was not the end of Courtney’s problems. I noticed some discharge around her C­-line. It was infected and had to be removed. Courtney was given antibiotics.

Infection at the site of the port that is placed in the patient before administering the ANP is a fairly common complication (see the cases of Keith G., Erik M., Leo D., and James N.) and one that the Burzynski has had trouble reporting to the FDA in the past, at least according to a recent inspection, when the FDA told Burzynski:

“You failed to protect the rights, safety, and welfare of subjects under your care. Forty-eight (48) subjects experienced 102 investigational overdoses between January 1, 2005 and February 22, 2013, according to the [trial number redacted] List of Hospitalizations/SAE (serious adverse events) [redacted]/ Overdose [redacted]/Catheter Infection report. Overdose incidents have been reported to you [….] There is no documentation to show that you have implemented corrective actions during this time period to ensure the safety and welfare of subjects.” [emphasis added]

Sadly, more complications are lurking around the corner for Courtney:

After only a couple of more months of antineoplaston therapy, Courtney again began to have serious problems. She stopped eating, developed prolonged diarrhea, nausea, and vomiting. She stopped drinking, too. Therefore, her sodium levels became high. We found ourselves in and out of the emergency room. Finally, we decided that Courtney needed a feeding tube. The tube is connected to pumps that provide 100 cc of formula and 300 cc of water to Courtney every hour. From April 1998, when she began antineoplastons, to February of 1999, Courtney’s brain tumor has decreased by 75%.

It’s hard to imagine how this patient is benefiting from this supposed decrease. Even in the father’s story, things seem to be getting steadily worse. Indeed, when the parents’ account was written, Courtney is not attending school, attending ballet, running, or playing.

The father seems to think that the side effects are caused by the radiation. Of course, the high sodium levels are a well known side effect of antineoplastons–patients report having to take in huge amounts of water to keep their sodium levels in check–and the same type of complication may have killed Josiah Cotto, and it certainly led to an overdose in Luna P., whose regular doctor reacted like this when he heard how high her sodium level was (178):

Indeed, hypernatremia is the top entry on the lengthy list of side effects that appear on the antineoplaston informed consent sheet that every patient receives: 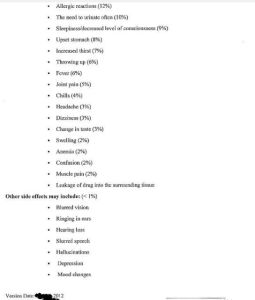 In December 1999, according to the Post in March 2000, the family hears that the tumor is 90% gone, though if it is true, there is nothing to confirm that it was that antineoplastons and not all the prior treatment.

In May 2001, a magician decides to unicycle across the country to raise funds for Courtney. The snippet from the May 13th Cincinnati Enquirer is revealing:

“I really have two reasons. One, I want to raise money for Courtney. Two, I want to raise awareness of Dr. (Stanislaw) Burzynski and his Houston clinic.” “Courtney” is 10­-year­ old Courtney [H], suffering from an inoperable brain stem tumor and receiving Dr. Burzynski’s $7,200 a month treatment. It’s considered alternative, so insurance doesn’t help. Mr. Dalton’s brother Mark had the same treatment last year and his tumor was nearly gone when he had to go off the medication. He died in March 2000.

Imagine that. Tumor almost gone, patient dead shortly thereafter. This is not an aberration; it happens over and over and over. In another report, from 25 Jan 2001, we see this account of Mark’s tumor:

The treatment got rid of Mark’s tumor, but other complications arose. He died in March.

Bunk. But look at how Courtney’s parents describe what is happening:

However, many of the problems Courtney has experienced and is now experiencing are side effects of the radiation therapy she received.

It’s the same story, over and over. To the true believer, it’s never that the treatment didn’t work. It’s always something else.

A side note. The account that this was based on comes from the Burzynski Patient Group. Her story has disappeared from that site:

This is one reason that this site exists, to make sure that nobody’s story disappears down a memory hole. All the stories are important, not just the ones that Burzynski’s supporters think make him look good. We have far more stories than the Burzynski Patient Group will ever have, well over a thousand at this point, and we’ll tell them all.

All of Stanislaw Burzynski’s Patients

This website is sponsored by the Skeptics for the Protection of Cancer Patients. It is NOT affiliated with the Burzynski Patient Group, the Burzynski Clinic, or the Burzynski Research Institute. Those are all awful. Nor does this site mean to represent the views of any of the Clinic's current or former patients or those of their families or loved ones. All information posted here was either freely available online or in the press at the time of writing. Please follow the links included and hear the patients' stories in their own words as well.

To the best of the editors' knowledge all statements are accurate, and it is believed that all source use falls under fair use for critical commentary. Factual inaccuracies will be corrected immediately, provided evidence to the contrary. Disagreements over interpretation do not count as errors.

The editors wish to thank Ken White of Brown White & Osborn LLP, and who writes at @Popehat, for pro bono representation and advice regarding First Amendment and free speech issues.